Notes: Between 2003 and 2008, the Washington Huskies failed to make a bowl game. Keith Gilbertson was fired after a 7-16 mark at Washington, in 2004, after going 1-10 that year. Tyrone Willingham, a coach familiar with PAC-10 football from his days at Stanford, prior to taking over Notre Dame, coached from 2005-2008, with his last year producing a 0-12 team. Willingham was 11-37 in four seasons in Seattle. Washington hired former USC quarterbacks coach and offensive coordinator Steve Sarkisian to turn around the program. Sarkisian spent significant time in the PAC-10 and West Coast. His first year resulted in a five-win improvement, but he failed to make the post-season. Each of the last two seasons have been seven win seasons for Washington, their first back-to-back winning seasons since 2001-2002, when Rick Neuheisel was head coach. Still, Washington fans have to wonder whether Sarkisian can compete with the PAC-12 elite – he is 4-11 against ranked teams, including 0-5 in 2011.

BVTSB Take: Washington has inexperience at the running back and wide receiver positions. The loss of Chris Polk at running back is huge; he ran for 1488 yards and 12 touchdowns in 2011. Expect the running production to drop as the passing game will need to be emphasized a bit more. The offensive line has a couple of tackles to replace, as LT Senio Kelemete was drafted in the fifth round by the NFL’s Arizona Cardinals. RG Colin Porter is ending his college career due to a shoulder injury. Micah Hatchie will start at LT, while Ben Riva will start at RT, moving Erik Kohler to RG. Kohler started 13 games at RT last year. C Drew Schaefer and LG Colin Tanigawa return. Schaefer started 13 games last year, while Tanigawa started 11 before suffering an ACL injury. Keith Price returns at quarterback for his junior season. He threw for over 3000 yards last season, including 33 touchdowns, but 11 interceptions. Its’ going to be tough to top those numbers, but the experience Price has could help to cut down on his turnovers. One of Price’s favorite targets, TE Austin Seferian-Jenkins, returns, having 538 yards receiving and six touchdowns last year. Washington does lose their top two wide receivers from last year though, Jermaine Kearse and Devin Aguilar. Kearse is now a member of the NFL’s Seattle Seahawks and Aguilar is a member of the NFL’s Tennessee Titans, being reunited with quarterback Jake Locker. Kearse had 699 receiving yards and seven touchdowns last year; Aguilar had 611 receiving yards and six touchdowns. Expect Kasen Williams, Kevin Smith, and James Johnson to start at wide receiver. The trio combined for 1001 receiving yards and 10 touchdowns. Those numbers should easily improve, but whether they get close to Kearse and Aguilar’s numbers remains to be seen. Replacing Polk will likely be Bishop Sankey (187 rushing yards and one touchdown in 2011). Jesse Callier will likely be the backup (260 rushing yards and one touchdown in 2011). Washington opens with San Diego State, LSU, and Portland State – they should go 2-1 in those games. The opening part of the PAC-12 schedule is absolutely brutal though, with games against Stanford, at Oregon, and USC. Expect Washington to be 2-4 following their October 13th meeting with USC. Washington’s six other PAC-12 games are at Arizona, Oregon State, at California, Utah, at Colorado, and at Washington State. The remaining schedule is much more forgiving, and could put Washington in a position to have their highest win total, to date, under Sarkisian. 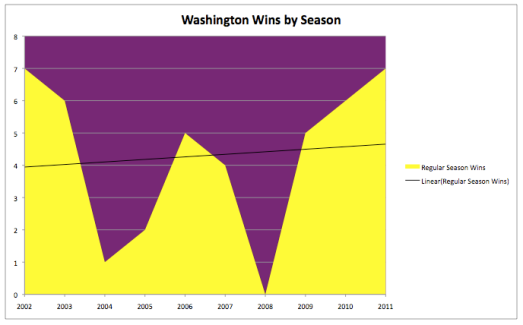 What are your thoughts on Washington football? Tweet to us @BVTSB.