Notes: Its hard to believe, but Grobe is the dean of ACC coaches (Frank Beamer has been at Virginia Tech since 1987, but in the ACC since 2004). Winning in Winston-Salem has been a struggle, but Grobe has had some success, most notably, an Orange Bowl appearance following the 2006 season – the last time Wake Forest won the ACC. Wake showed flashes of brilliance last season, especially with a 4-1 start. The Deacons posted wins against North Carolina State and Florida State last season, but lost to Syracuse in non-conference play. Still, the offense was impressive, but the defense at times let them down.

BVTSB Take: Wake is going to have to replace star wide receiver Chris Givens who will be playing with the NFL’s St. Louis Rams. Expect Michael Campanaro to attempt to fill the void. Campanaro had 10 less catches than Givens, but nearly 500 less yards. Running back Brandon Pendergrass departs for the NFL’s Baltimore Ravens, which means Josh Harris and Orville Reynolds will have a shot at competing for the starting positions. Harris and Reynolds combined for over 530 yards rushing in 2011, with three rushing touchdowns. Fortunately for the Demon Deacons, quarterback Tanner Price returns for his third season – he threw for over 3000 yards in 2011 and 20 touchdowns with only six interceptions If Price can maintain those numbers again in 2012, the Deacons will have a great shot at the post-season. Wake faces Liberty, Army, Notre Dame, and Vanderbilt in the non-conference play. The Demon Deacons should at least split those games. Home games against North Carolina, Duke, and Boston College should help Wake Forest get close, if not, make the post-season. Away games against Maryland and Virginia provide additional opportunities. If Wake Forest can seek to find a suitable replacement for Givens, or at least someone who can even come anywhere near his production, as well as an improved defense, Wake has a shot at the post-season. I think they will take a step back in 2012, because Givens is such a huge loss. 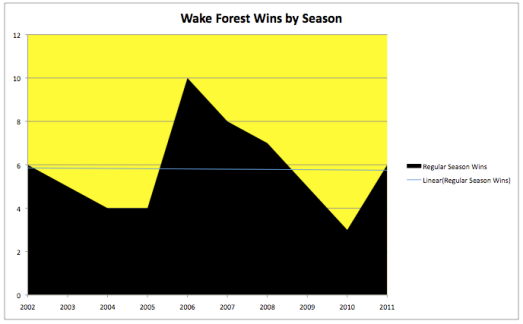 What are your thoughts on Wake Forest football? Tweet to us @BVTSB.