Notes: Tennessee’s biggest problem has been stability. With the departure of Phillip Fulmer in 2008, with a 5-7 record, Lane Kiffin took over for one season. Kiffin was 7-6 and promptly left for Los Angeles with the opening of the USC job. Volunteer fans were upset, not surprisingly, but many expected Kiffin to take the job if it were offered. Dooley has put together to losing seasons in Knoxville, with his first resulting in a bowl bid. From 2003-2004, Tennessee had four 9+ win seasons. In the last four seasons, Tennessee’s highest win total was 7, under Kiffin. Without a doubt Dooley is under pressure to win – Tennessee hadn’t had back-to-back losing seasons since 1910-1911, a feat they accomplished in 2010-2011. Dooley signed a six-year deal in 2010 to the tune of $1.8 million per season. Expect a change to occur if the Vols fail to make another bowl game.

BVTSB Take: Last year’s loss to Kentucky snapped a 26 game winning streak Tennessee had against Kentucky. It also meant Tennessee would finish in last place in the SEC East. If you were to use two words to describe Tennessee football last season, it would be “injury-plagued”. Quarterback Tyler Bray was one of a few players who lost playing time due to injuries. Bray, in seven games, threw for over 1900 yards and 17 touchdowns last season. Running back Tauren Poole departs for the NFL’s Carolina Panthers – he rushed for 693 yards and five touchdowns last season. Poole accounted for nearly 48% of Tennessee’s rushing attempts in 2011. Expect Marlin Lane to be the starter – Lane should be able to surpass Poole’s numbers, if healthy. All three receivers and the tight end will be back for Tennessee this year. Expect Justin Hunter, Da’Rick Rogers, Zach Rogers, and Mychal Rivera to put up better numbers in 2012. The four combined for 1887 receiving yards and 13 touchdowns last season. Rivera missed the Montana game, while Hunter only played the first three games, being injured early in the Florida game. Tennessee does lose DeAnthony Arnett, who transfers to Michigan State, but should be in good shape in the receiving corps, if healthy. Defensive Coordinator Justin Wilcox departs for the same position at Washington; Sal Sunseri will fill the position. Sunseri was the assistant head coach and linebackers coach at Alabama from 2009-2011. Last year the Vols played Montana, Cincinnati, Buffalo and Middle Tennessee, winning all of those games. They only won against Vanderbilt in conference play, beating the Commodores in overtime, 27-21. In games decided by a touchdown or less last year, the Vols were 1-2; their average margin of defeat was by 19.4 points. Tennessee averaged 11.5 points per game in conference play (they averaged 22.4 in 2010) – largely due to the massive amounts of injuries. This year Tennessee faces North Carolina State, Georgia State, Akron, and Troy in non-conference. Tennessee should be at least 3-1 in those games, with the NC State game being a toss up. The road games will be tough, with Vanderbilt likely being the only winnable game. Tennessee hosts tough games against Florida and Alabama, but has opportunities against Missouri and Kentucky. I like Tennessee to make a bowl game this year, if healthy. 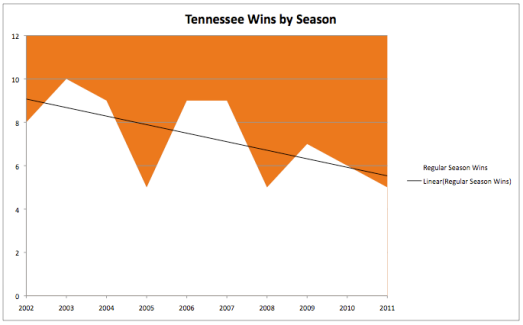 What are your thoughts on Tennessee football? Tweet to us @BVTSB.