Notes: Dennis Erickson’s tenure in the desert ended last season, with the Sun Devils having high expectations, but disappointing. Arizona State started the season 5-1, but lost six of their next seven to finish below 500. More importantly, Erickson was 2-3 against rival Arizona, with the wins by a combined four points. Despite being a ten-point favorite last year, Arizona State lost The Duel in the Desert. Under Erickson, Arizona State was 21-24 in conference play. Further, the program only made bowl games in his first and last seasons. Now Todd Graham takes over. This will be Graham’s fourth head coaching job and third in the last three seasons. Clearly, Graham has no problem moving onto a better job, if it is available. Be wary Arizona State fans, especially with the dominance of USC and the rise of UCLA and Utah, Graham may be gone at the end of the season – especially if the Arkansas job is open – or at the end of the 2013 season.

BVTSB Take: Arizona State is the youngest team in the PAC-12 this season. It was already expected to be a tough transition from a pro-style offense to a spread offense under Graham. Quarterback Brock Osweiler was drafted by the NFL’s Denver Broncos, so the Devils are left with no experience at that position. Three quarterbacks are in the mix for the starting position according to Coach Graham – Michael Eubank, Mike Bercovici, and Taylor Kelly – all of which are underclassmen. Graham will have the benefit of running back Cameron Marshall returning. Marshall rushed for 1050 yards and 18 touchdowns last season. Receivers Gerell Robinson (Denver Broncos), Aaron Pflugrad, and Mike Willie (San Diego Chargers) have all took their shots at the NFL. With the top three receivers from 2011 departing, the offense may struggle, especially early. That leaves Jamal Miles, 361 receiving yards, and six touchdowns, as the most experienced receiver heading into 2012. Last year, the Sun Devils opened with UC Davis, Missouri and at Illinois, winning the former two and losing the later. Wins over USC and at Utah were impressive as well, before ASU took a nose-dive. This year, ASU opens with Northern Arizona, Illinois, and at Missouri. Expect struggles this season, though the Devisl have winnable home games against Utah and Washington State. Winnable road games include Colorado, Oregon State, and Arizona. The Devils haven’t won back-to-back games at Arizona since 2000 and 2002. The win projection should be considered a floor. Coach Graham is more than capable of taking this team at the bowl game, especially with a number of winnable games on this schedule – it all depends on the quarterback play. 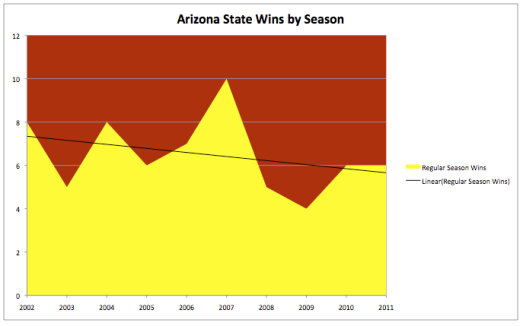 What are your thoughts on Arizona State football? Tweet to us @BVTSB.